Mitsubishi’s new Outlander PHEV goes for a power slide on the ice.

In a comprehensive update to the best-selling EV in the Australian market, the new Outlander PHEV has adopted the styling changes from the Model Year 2017 Outlander range while introducing new technology and increased convenience.

The Outlander PHEV was developed from the ground up to be driven by either an internal combustion engine or hybrid technology and as a result there are no compromises in terms of packaging, practicality or driving dynamics.

For 2017 Mitsubishi introduces a new EV Priority Mode across all variants. The new EV switch is located below the 4WD button and once activated, it allows the driver to operate the vehicle in EV mode without the engine starting, provided there is sufficient charge in the batteries.

The electronic parking brake’s auto hold button function which, when activated, holds the vehicle in traffic or on an incline the same way a handbrake would, allows the driver to release the footbrake.
Its stylish and functional interior includes a redesigned steering wheel, new accent trim, improved seating comfort with premium finishes and materials to give the cabin a more sophisticated feel.

Ride quality and comfort have been enhanced with increased structural rigidity in the body, revised suspension design, new Electric Power Steering calibration and reduced noise, vibration and harshness (NVH) throughout the vehicle.

The new Outlander PHEV retains its predecessor’s outstanding safety and environmental performance through the use of cutting-edge four-wheel drive, passive safety technology as well as fuel-efficient engine technology.
Pure EV range extends up to a maximum of 54km, while overall fuel economy has been reduced to 1.7-litre per 100km based on the ADR 81/02 fuel economy cycle. 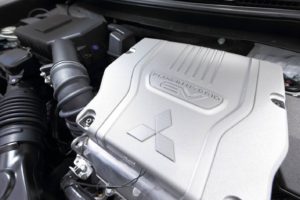 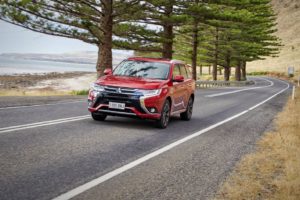 Interior
The new Outlander PHEV gets a fresh design update to the interior space incorporating stylish yet functional features. 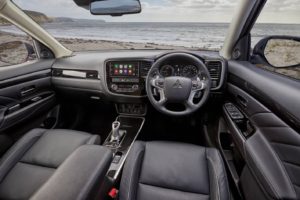 The interior is embellished with soft touch features and premium grade materials at every contact point. A new design four spoke steering wheel features gloss black bezel and new accent trim has been applied to the doors, dash and centre console. New material headlining, subtle stitching highlights on the instrument panel and a soft centre armrest enhance the sophisticated feel of the cabin. 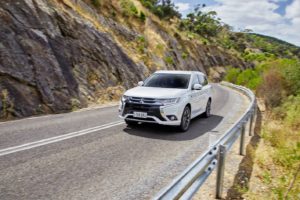 The new Outlander PHEV boasts improved handling dynamics and greatly reduced noise, vibration and harshness (NVH) along with increased body and structural rigidity for a super quiet and composed ride.

NVH improvements have been developed in part from the application of extensive sound insulation and isolation damping materials throughout the vehicle. Engine noise, cabin boom, road and wind noise are all reduced due to noise-isolating windscreen glass, improved weather stripping, new tyres, damper tuning and modified suspension mounts.

The Outlander PHEV is unique in offering adaptive four-wheel drive with twin electric motors driving the wheels. The front and rear axles are each equipped with their own high-output motor to deliver powerful acceleration when needed, while maintaining an incredibly responsive 4WD performance.

The Outlander PHEV maintains its five-star ANCAP safety rating thanks to its combination of active and passive safety features.

Like all models in the Mitsubishi range, the Outlander PHEV is backed by a 5 year/100,000km warranty.